What is bovine tuberculosis?

Bovine tuberculosis is an infectious disease of cattle. It is caused by the bacterium Mycobacterium bovis (M. bovis). The bacterium can also infect and cause disease in badgers, deer, goats, pigs and camelids (llamas and alpacas), as well as many other mammals. In cattle, TB is primarily a chronic respiratory disease but clinical signs are rare.

Bovine TB is a zoonotic disease, which means that it can be naturally transmitted from animals to humans under certain conditions. With a comprehensive TB eradication plan in place in the UK, human cases of TB caused by M. bovis infection are rare, but it can cause significant problems in developing countries. Bovine TB is one of the biggest challenges facing the UK cattle farming industry today, particularly in parts of Wales, the West and South West of England.

Please select a location on the map for further information.

Cattle to cattle is the primary transmission route, but the disease can also pass from cattle to badgers and badgers to cattle, through direct or indirect contact. The links between badgers, cattle and TB infection were first suspected in the early 1970s and subsequently proven beyond doubt. Professor Sir John Krebs concluded in his 1997 report that there was “compelling evidence” that badgers transmit TB to cattle.

Various reports (Zuckerman and Dunnet) submitted to the government, concluded that the badger is the most important wildlife reservoir of M. bovis in the UK and it is involved in the maintenance and transmission of the disease to cattle. Where there is no reservoir of disease in wildlife, strict surveillance testing and control measures can be enough to eradicate the disease, and this has been achieved in Scotland and many EU countries.

Bovine TB is mainly a respiratory disease, caught by inhaling M. bovis bacteria. This usually happens when animals are in close contact with each other, so animal density is a major factor in the transmission of M. bovis. Bacteria released into the air through coughing and sneezing can spread the disease to uninfected animals.

Direct transmission can happen through nose to nose contact. Indirect transmission is also possible through contact with urine, faeces, pus from abscesses, etc. Food and water contaminated with the bacterium can also be a source of infection. M. bovis can also be transmitted from infected cows to their offspring during suckling, and through the feeding of infected unpasteurised (raw) waste milk to calves. Cattle grazing areas where infected badgers have been present are exposed to a risk of infection.

Find out how M. bovis is so successful as a bacterium, and why bovine TB is so difficult to eradicate.

Access our interactive TB statistics dashboard to find out about the bovine TB situation in your local area.

TB Advantage is a genetic index published by AHDB to help dairy farmers breed cows with an improved resistance to bovine TB.

Information about a range of exciting research and development being carried out in the field of bovine TB.

Through the use of DNA typing techniques, M. bovis can be ‘broken down’ into different strains or genotypes, which tend to be geographically localised.

To characterise the strain of the bacterium infecting an animal, the Animal & Plant Health Agency (APHA) national reference laboratory for bovine TB uses a combination of two techniques that target different regions of the M. bovis DNA: spoligotyping and VNTR typing.

The map shows the distribution of major M. bovis spoligotypes in cattle in GB in 2018. There are also minor spoligotypes which can be seen in the APHA bovine TB surveillance data report. 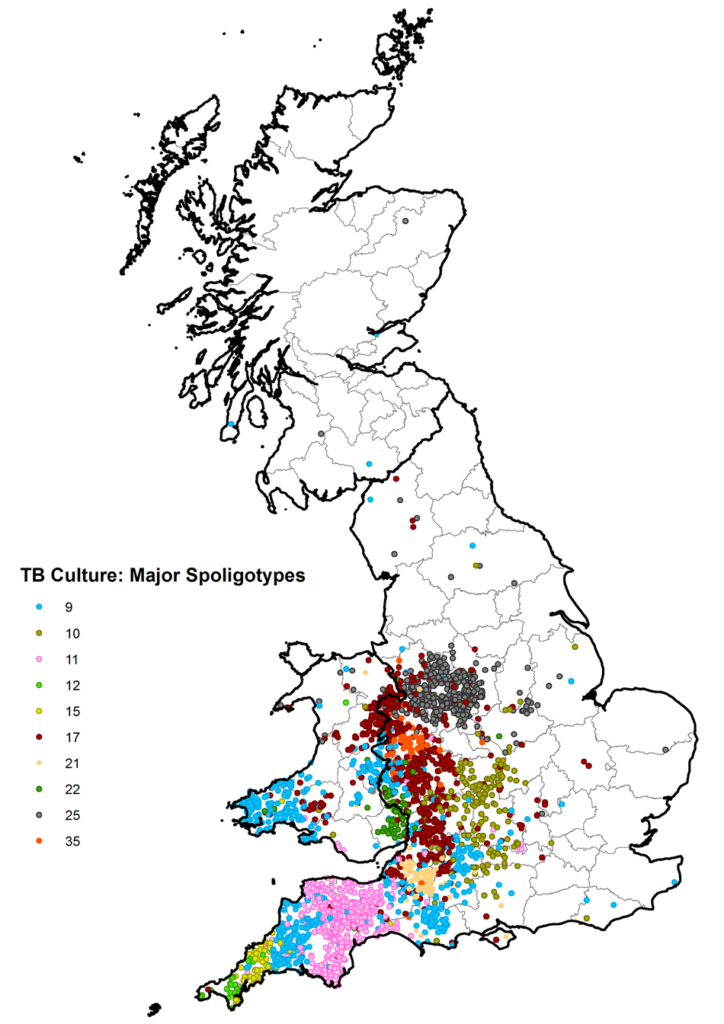 The story of bovine TB – The attack of the clones

Mycobacterium bovis, the bacteria that causes bovine TB (bTB), is a fascinating beast. Because it doesn’t have sex very often – perhaps not at all – each bacterium is a clone of every other bacterium. For the forensic microbiologist, this high genetic stability is both a blight and a blessing. It is a blight because it makes tracking short-term variation in M. bovis extraordinarily difficult, unless you use whole genome sequencing. But it is a blessing because it makes tracking the long-term origins of M. bovis much easier. So what does this tell us?

First, it says that the British Isles has its own clone of M. bovis (ingloriously referred to as the SB0140 clonal complex). About 85% of bTB in Britain is caused by this beast but it is almost absent from our continental neighbours. Therefore, for example, the M. bovis bacteria in France is very different to what we have in the UK. SB0140 does however have some closer relations in Australia, New Zealand, Canada and South Africa, probably dating way back to the days of the British Empire through cattle trading with these nations.

Second, when one drills down in to the details of this clonal complex within Britain one finds an interesting pattern. There are different forms of bTB in different areas. Put simply, if bTB could talk it would probably have regional accents. This implies, for example, that bTB from Somerset doesn’t mix much with bTB from Cornwall. Now, if you are in to bTB like I am this is just fascinating. It also an encouraging signal that cattle movement controls to prevent the spread of bTB are working, as otherwise we would probably a lot more mingling of the bTB strains and an eventual blurring of regional distinctions. That there are still such thick ‘accents’ between regional variations suggests some success in containing them within their regions.

The emergence of the SB0140 clonal strain in the British Isles is a bit of a conundrum. Could it be the result of selection caused by the kind of test we use to determine whether cattle have TB? To test cattle for TB, we use a strain of TB (called AN5) that was gathered from an English cow in the 1940s. While this test is still perfectly adept at picking up SB0140, we have found through our testing that the original strain, AN5, has been successfully eliminated from English cows. It is interesting that while this strain has died out, SB0140 has survived and flourished. This leads me to an intriguing hypothesis; is SB0140 specifically adapted to survive and thrive in badgers?