Once TB-infected cattle have been found, milk and movement restrictions come into force.

TB-infected cattle can be found by: 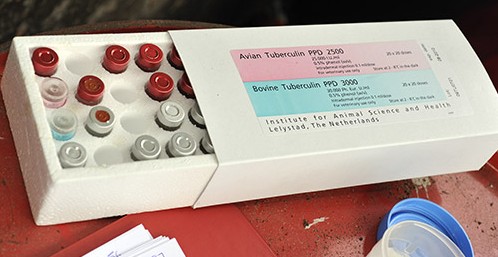 Reactors found at a skin test

The flow diagram below summarises what happens when one or more TB reactors are found at a skin test. The number of herd tests needed and use of the interferon-gamma blood test depends on which TB risk area the herd is located in, and the results of skin testing and post mortem inspection for any reactors found. To check which TB risk area your herd is located in, take a look at our interactive risk map.

For slaughterhouses cases, the process is slightly different as shown in the flow diagram below.

If TB is suspected or confirmed in a cattle herd, movement restrictions are automatically immediately applied to the whole herd.

Milk restrictions are also applied immediately if TB is suspected or confirmed in a cattle herd.

To register for a Waste Management Licence Exemption you will need to contact the Environment Agency.

For more information about the Animal By Products regulations relating to the feeding and disposal of milk, see the guidance on GOV.UK.

TB breakdowns are classified by APHA for operational reasons, to manage the breakdown effectively and ensure that all appropriate disease control activities are carried out. There are two broad categories, and these differ for England, Scotland and Wales.

Officially TB free (OTF) herd status is suspended (OTFS) when one or more skin test reactors or interferon-gamma positive animals are detected in a herd, but no lesions typical of TB are found at post mortem inspection, and the culture results are negative for the bovine TB bacterium (M. bovis), or pending. APHA may also apply movement restrictions to temporarily suspend the OTF status of certain herds that are not experiencing a TB breakdown. This will happen automatically for instance when:

OTF herd status is withdrawn (OTFW) if any of the following apply:

All herds experiencing a new TB breakdown in the High Risk and Edge Areas of England (and certain herds in the Low Risk Area), must undergo a minimum of two successive skin herd tests at severe interpretation with negative results before they can regain OTF status, irrespective of post mortem and culture results. The readings of the disclosing skin test are also reinterpreted at severe.

The main difference between OTFS and OTFW breakdown herds is that the latter can qualify for supplementary interferon-gamma blood testing, and trigger source and spread tracings.