For TB breakdowns where lesions suspicious of TB are found in the carcase of a reactor and/or M. bovis is cultured, TB testing of cattle herds in the local area is carried out to find any spread of infection from the breakdown. 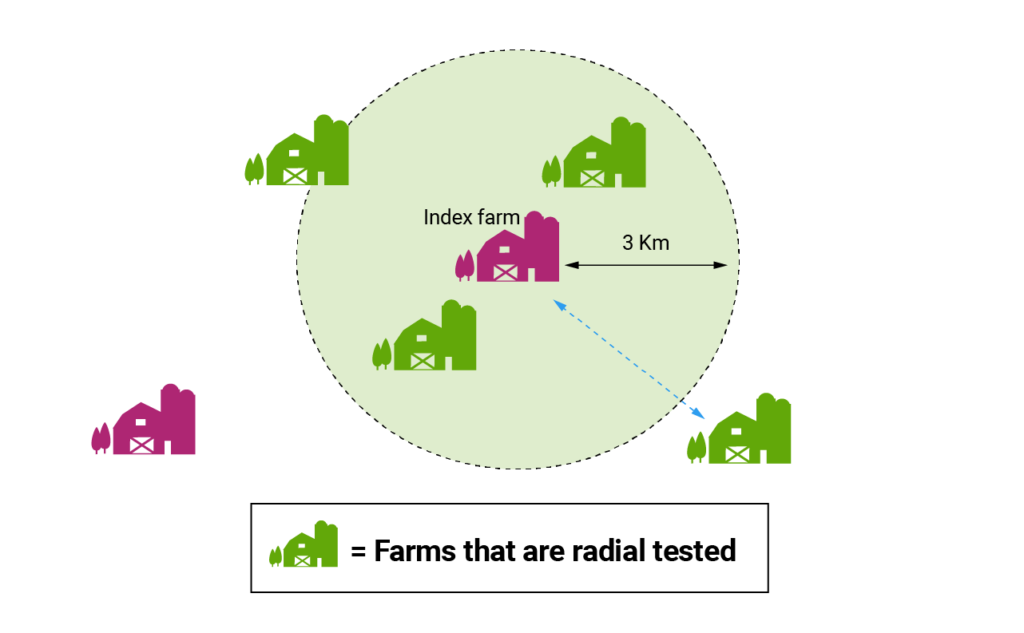 Radial testing is a targeted surveillance test carried out on cattle holdings around all new TB breakdowns with lesion and/or culture positive animals identified in the Low Risk Area (LRA) and annual testing parts of the Edge Area. The purpose of radial testing is to check for spread of TB to neighbouring cattle herds and to ensure that any undetected source of infection in the locality is found, supplementing the routine surveillance testing regime in those herds.

All cattle holdings falling within or straddling a 3km radius circle of the new (‘index’) TB breakdown farm are identified by APHA and required to undertake an immediate radial test of all cattle on the holding aged 42 days and older. The radial testing regime is also applied to cattle herds that are outside of the 3km radius circle that have had regular direct or indirect contact with holdings within the 3km radial testing area. Cattle keepers are informed by APHA if they need a radial test. Additionally, herds in the LRA that require radial testing also need to pre-movement test their cattle for the duration that they are undergoing radial testing. APHA communicate this to affected keepers by letter. Herds in the Edge Area already need to pre-movement test their cattle, and so there is no change if radial testing is needed.

If the immediate radial test (RAD) is clear, the herd has another radial test six months later (RAD6). Herds with a clear RAD6 in the Edge Area revert to their normal routine testing. In the LRA, they require a further radial test (RAD12) before returning to their normal routine testing frequency (four-yearly in most cases). Radial TB tests are paid for by the government. On occasions, APHA does not trigger radial testing around a new TB breakdown herd if it is not considered necessary following the outcome of a veterinary risk assessment. 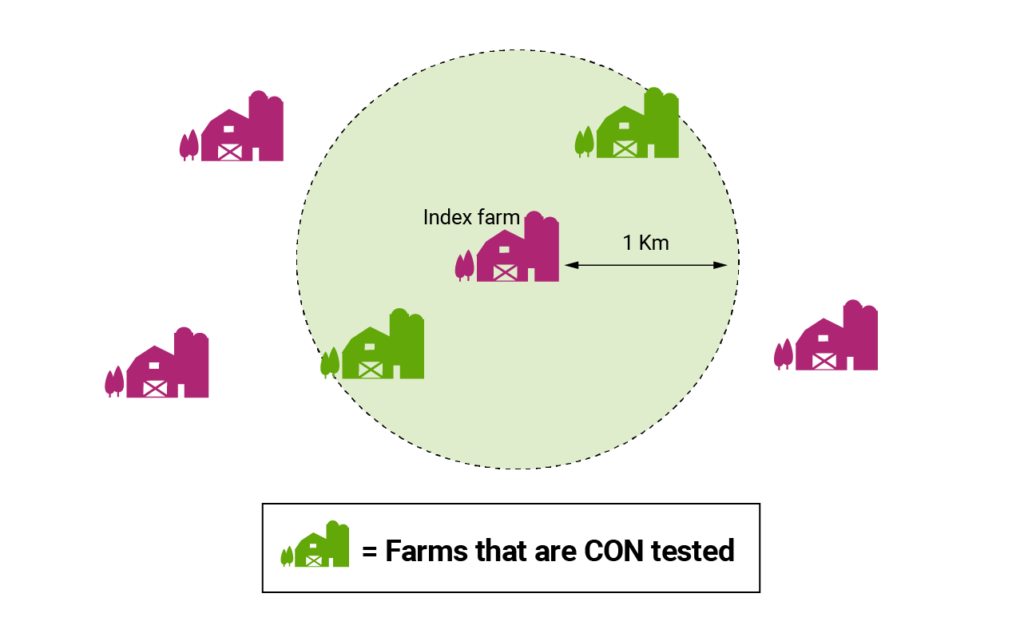 In the HRA, contiguous testing is applied to all herds in the locality of the index TB breakdown to ensure that infection hasn’t spread to local cattle herds. As TB is considered to be endemic in the wildlife in these areas, identifying spread to other neighbouring herds isn’t as critical as it is in lower incidence areas, so a smaller 1km radius from the index farm and associated land boundaries is normally used, compared with 3km for radial testing.

Tracings are used to help find animals that may have either introduced the infection onto the farm (source tracing) or may have spread the infection to another farm after being moved off (spread tracing).

Source tracing is the investigation of animals moved into the breakdown herd, in an attempt to find the source of infection. As a result of a source trace (also known as back trace), skin testing can be requested in the herd(s) of origin of those animals.

Spread tracing involves identifying and testing cattle that have moved off a TB breakdown holding that has had lesion and/or culture positive animals within a defined period of time (tracing window). Any cattle that moved off before the application of TB restrictions are traced and, if still alive, TB tested to minimise the risk of disease spread to other herds. In England, cattle identified as spread tracer animals are tested using severe interpretation to reduce the possibility of missing infected animals.